Every time there’s a new drama on TV, shippers come to town and paint it red.

They declare their new “OTP” (one true pair) as the greatest onscreen tandem everrrrr and that it would be cool if they date in real life too. They search for forums to look for like-minded individuals, exchange notes and generally just swoon collectively. They religiously monitor every news of their OTP during the duration of the drama with more squealing to follow of course. Give and take two months later, a new OTP emerges from the small screen, and everyone jumps ship. Another ‘greatest OTP’ has been born.

Welcome to the world of seasonal shipping.

I should know. I am a shipper myself, except that mine has withstood the seasons and I don’t liberally throw around OTP as a term. But well, whatever floats your boat, er, ship.

And I’m sure this season, there will be seasonal shippers emerging in the aftermath of ongoing dramas, pushing their own ships to the big ocean. There’s Roy Qiu and Alice Ke from Office Girls; Peter Ho and Janine Chang from Ring Ring Bell. I don’t think that Chen Bo-lin and Ariel Lin would be effective though, considering that Ariel has a non-ebiz boyfriend.

Last season, in case we have forgotten, there were Mike He and Janine Chang from Sunny Happiness, Joseph Chang and Rainie Yang from Love You, Mike He and Cindy Wang from Love Keeps Going… did the Wu Chun and Rainie Yang ship from Sunshine Angel ever float? But those are so 100 years old. People have all moved on now… to other OTPs selling their own dramas.

For someone watching Office Girls, I’m just glad that SETTV seems to be uncharacteristically subdued or have I been sleeping in the haystack? They haven’t exactly been cooking scandals between Roy and Alice in order to “sell the drama”, and if they do, I won’t buy it but I’d be very amused just the same. 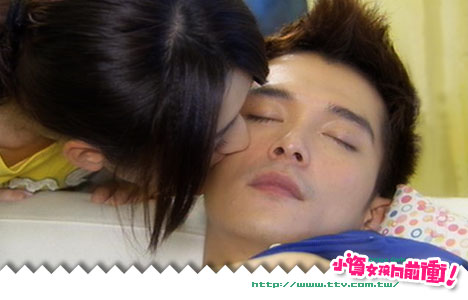 My amusement is partly because when I first checked the cast of Office Girls to see if it would be interesting to watch, I saw Alice’s name. So, I thought, this is Wang Bo-chieh’s ex-girlfriend.

I interviewed Wang Bo-chieh (English name: Edison) in 2009. I didn’t even know who he was from Adam and no one wanted to take the assignment after they heard that Nicholas Tse was not coming to Bangkok to promote Bodyguards and Assassins. And only this dude, who was celebrated for his breakthrough role in Winds of September, was coming. Who? I mean, who would want to interview a nobody? But curiosity got the better of me and I went ahead anyway. I asked him a question related to a project that I’m still working on, on why stars lie about their personal lives. His answer surprised me. He said he won’t lie about this personal life and hopes his fans would accept it. I asked him pointblank if he had a girlfriend that moment. He said none. I told him jokingly that I’d be watching him and see if he’s gonna lie. And then a a few months later, this story about him and Alice came out. Nice going there, Edison (and you could have chosen an English name that wasn’t so tainted in the ebiz). At least Alice was more open though I wonder if there was a price to pay for this moment of, erm, honesty.

I don’t think my path will cross again with Edison but he just proved my theory: stars will always lie about their personal lives, and when they become very open about it especially if they are collaborating on a project together, be wary and suspicious. Most likely, they’re just trying to literally sell a drama.

Back to seasonal shipping, I don’t think I’d be shipping Roy and Alice… not even Peter and Janine, though I find them a really lovely couple. One OTP to ship is enough for me.

But that doesn’t mean I am not enjoying Qin Zi Qi and Shen Xing Ren. Let the ship sail into the ocean for our Zi Qi and Xing Ren!