(Disclaimer: I am an animal lover and I especially love dogs and absolutely adore penguins. So the tongue-in-cheek remarks here do not mean I don’t love them, I just need some humor to get past watching Nankyoku Tairiku that is sometimes as cold as the Antarctic.)

Episode 3 is titled: “Our Miracle Dogs” so it gives one an idea on the plot points here. It’s going to be a dog’s world.

Nankyoku Tairiku is full of minor plot points in each episode. For this episode:

1) On arrival in Antarctica, the team needs to divert its route in order to get to their assigned area, which, in the first place is inaccessible.

2) While transporting the provisions from the ship to the station, Kuma, one of the dogs, wanted to eat a penguin alive and distracted the rest of the dogs ending in a showdown between him and Rikki, the leader. After the incident, Rikki suffers low morale and refuses to lead. But I am baffled that this did not occur to Kuramochi. The dogs’ main trainer needs some dog psychology skills himself.

3) As the team builds their base station, the ice surrounding them starts to float away, taking three months of their provision. I can see famine coming… the penguins should really run for cover now because it may not just be dogs running after them but humans too.

4) Samejima, the resident boor, is always spoiling for a fight; and Himura, the finance ministry representative with the permanent annoying smirk plastered on his face is always out to get Kuramochi’s neck.

5) I thought when team leader Hoshino (my favorite character in this ensemble drama so far) stands up during an argument on what supplies to take or not, he would say: “Fine, if you want to leave the dogs behind, then better to just kill them, preserve their meat so we would have something to eat when we winter over.” This drama is so high-tension there should be a comic relief, seriously. Was post-war Japan that dour?

6) Kuramochi is kind of slow on the uptake. Hoshino already hinted to him that if there is something that would trigger the dogs to run, they would. Then why not use a penguin as trigger?

7) Even among the dogs, there is an anti-hero and this black dog Kuma is getting into my nerves. He starts attacking the other dogs. Now, what is this dude’s problem? He really has serious issues and I am equally serious about preserving his meat, but then, this dog is rabid. Won’t be safe to eat.

8 ) A blizzard comes and blows away their newly assembled station. Sweet. And then Samejima, in a blaze of heroic fervor, leads some of the team to go out in the snowmobile and “protect” their home. You go, guys! Then of course, 10km away from Soya, the mobile stops “on its own” and they see the fuel is… empty. Samejima, the self-appointed leader, did not think of taking along extra fuel. Way to go, guys. Really.

9) And Hoshino did say it out: go for it! This after Kuramochi decides to use the dog sled and bring fuel to the stranded members of the team, a decision which Mr Finance Ministry of course opposes (because that is his mission in life, to oppose everything).

10) While Kuramochi is getting the dogs ready, Kuma makes another scene (because that is his role too, to be the dog-to-hate in this drama) and by this time, I am tempted to ask the fat cook to put poison in that stupid dog’s food. But then, Rikki, my dog hero, finally comes out of his misery and deals with that idiot himself. Only then does Kuramochi remembers what Hoshino said, that if something triggers them, they will run. Run, Rikki, run!

(But damn, Takuya is good in that scene as he watches Rikki and Kuma fight. He’s a doglover himself so I’m sure he’s acting from experience. And Mr Finance Ministry finally smiles, though I’m not sure if that’s a genuine smile or he’s just constipated.)

11) And so the dogs rescue the stranded team… and justify their existence in this mission.

12) Mr Finance Ministry cannot take this sitting down letting Kuramochi become the hero and even the dogs beating him to stellar status. So he leads the rest of the team (pulling along a cargo like Santa Claus) on foot to follow back to the station and help the rest. Watta hero, that’s my man.

And when Kuramochi greets him, he replies with a grunt: “We don’t have much time to waste.” Kuramochi should have said: “You wasted the entire night in the warm confines of Soya, you baka!” But of course, Kuramochi just smiles like a saint.

13) And so finally, everyone momentarily forgets their differences and they finish building the base station, which they called Showa Station. Thus begins the first wintering over expedition. 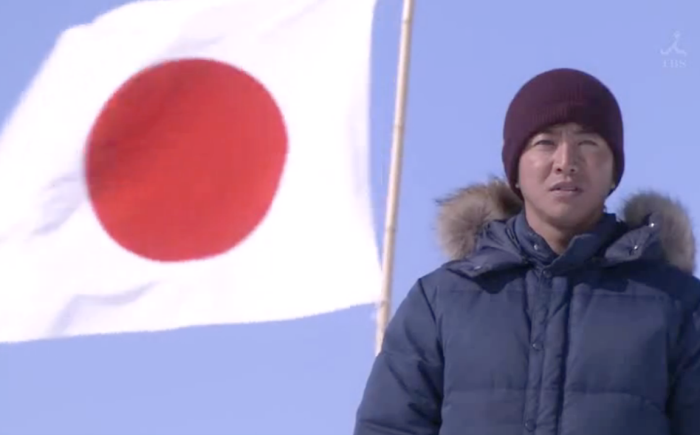 I have to concede, if you can act with dogs and get an emotional reaction, then you must be a gifted actor like Takuya (despite the acting mannerisms). He really fits the role knowing that in real life, he also has dogs (he named his Italian restaurant after Bonita, his black lab). Among the dogs, Rikki is the best actor I swear. That dog knows how to preen and act for the camera.

Soundtrack really plays an important part in this drama in evoking the right emotion. But I dread the winter bearing in mind the story of Eight Below. And already, in the preview of episode 4, one of the dogs die. And the team meets with more drama and tragedy. 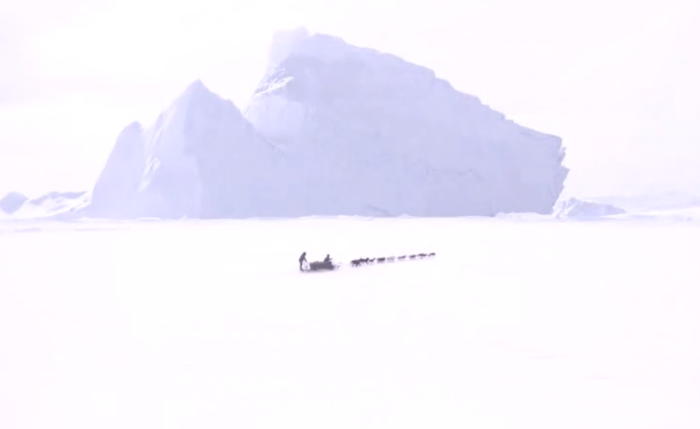