The first time I heard about the story of the Yang clan was when I flew all the way to Bandar Seri Begawan to interview Wu Chun in May. He has just been cast in the movie and he was very excited about it so when I returned and started writing the story, I had to look up what this epic was about.

That time, Louis Koo was still cast as the eldest son but due to a recent accident, he had to back out from the film and his role has been taken over by Ekin Cheng. So can it be said that Ekin saved the film? Chun said then that he would play the youngest son who would carry his father back home. But according to recent reports, he actually plays the sixth of the seven sons. (I haven’t read the classic yet but recent articles noted that the focus has always been on the sixth son though the new film will give attention to all the rest.)

Aside from Ekin and Chun, the other well-known cast members are Vic Chou (Zai Zai) and Raymond Lam (he of the 2011 HK photo scandal with Mavis Pan). Vic plays the third son while Raymond is the fifth. The others are actors from the mainland.

Perhaps the most prominent production on the Yang clan was in 1985 for the anniversary of TVB, The Yang Warriors Saga, with Hong Kong’s top actors Andy Lau, Francis Ng and Tony Leung.

The story of the Yang clan has also been retold in Chinese opera, and other TV and drama adaptations, including the story of the women in the family. Raymond Wong, who is producing the film, did not discount producing one on the female warriors but that would depend on how Saving General Yang will fare at the boxoffice. 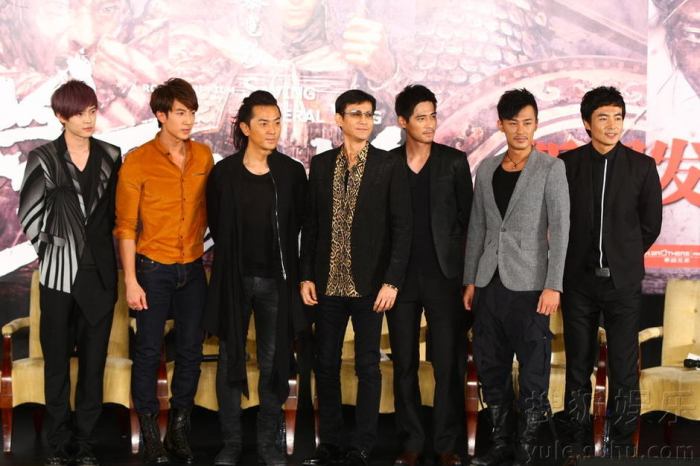 The new cast with Ekin Cheng (3rd from left).

The new movie costs $15 million and looks promising with Ronny Yu, who directed Jet Li’s Fearless, at the helm. It comes out next year.

End note: Let’s play daydream. If we’re going to cast the 12 female warriors in the Yang clan, who would it be? There has to be a balanced representation from China, Hong Kong and Taiwan, right? I’m thinking Maggie Cheung (as the matriarch), Cecilia Cheung (oh how she would fit the role of a feisty female warrior), Barbie Hsu (a controversial star in any project won’t hurt), Rainie Yang (there’s a cute female warrior), Gui Lun-mei (one of the best actresses of her generation) and maybe throw in Zhou Xun and Vicky Zhao too so they can have a catfight for real. <end of daydream>