He is also known as Korea’s Susan Boyle.

Remember Choi Sung-bong who won hearts in his first appearance at Korea’s Got Talent? 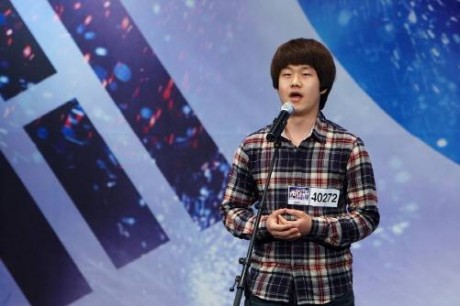 He was sold to an orphanage at three years old but he escaped because of physical abuse and grew up on the streets of Seoul selling chewing gum. Though his story has touched people across the world, and including the three judges of the TV show, there have been some cynics who are not buying his story.

I hope–not so much as to prove his cynics wrong but more because he has this wonderful talent and everyone deserves a place in this world–Sung-bong reaches the finals on August 20.

In his latest performance at week 1 of the semi-finals, the male judge told him that he can no longer use his sob story to get ahead in the search, but that he should showcase his talent more. The two lady judges urged him to smile more. It breaks my heart to see him with that blank look on his face despite the support and admiration he has been receiving. Has his life been so hard that he has forgotten to smile?

This is his latest performance:

When asked by the two hosts how he feels about his growing fame across the world, he said: “I’m glad that I have found a reason to live.”

The first lesson from Sung-bong was never to give up on our dreams. This is the second one: find a reason to live. His is music. What’s yours?