Craze was crazy!!! The power of music really. These guys, who are otherwise ordinary offstage (I mean, I’ve met and interviewed those that would make you quiver in their mere presence) transform into rock stars onstage.

They brought the entire hall into their feet, even the “mature” Taiwanese which is not really their market. There was a group of young girls on the second row behind me that were screaming like there was no tomorrow.

Below is one of my favorite photos of them, I want to give myself a pat on the back for taking this. (I’m posting those I posted on Weibo because I’m too sleepy to bother with watermarks.) 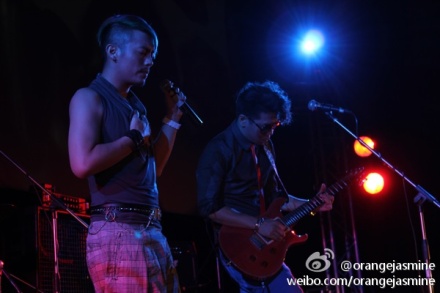 And thanks to Craze, I am starting to get the hang of being a multimedia journalist. I reckon covering a concert is the most fun and coolest multimedia coverage there is because it’s a good mix of color story, pictures, video and audio.

Van Fan performed “I Believe” (theme of My Sassy Girl) that made him popular a few years ago. They also did some songs from Cape No. 7.

One thought on “One Craze-eeeee Night!!!”