Sometimes it’s not enough for stars to simply sing or act, they also have to reach out and interact in order to make a connection with their fans 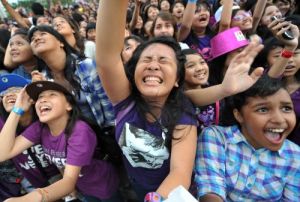 In Singapore’s Changi airport last month, about 50 teenage girls waiting for Canadian pop sensation Justin Bieber broke into tears when they found out that they have been given the slip by the 17-year-old singer.

Similar scenes were repeated a few days later at Kuala Lumpur’s and Jakarta’s international airports when Bieber exited through another door instead of coming out where hundreds of his fans expected him to. The star has cited security reasons for doing this.

Perhaps learning from these previous disappointments, only seven fans were reportedly waiting at the Hong Kong airport when Bieber arrived there before his concert last week.

Earlier in Manila, where Bieber performed also last week, many went home disappointed when his concert was cut short to one hour because he was reportedly sick.

“There was a lack of fan service,” said *Ailamarie, who went to watch the Manila concert.

What exactly is fan service?

The urban dictionary defines it as a phenomenon designed to amuse or excite the audience, and give fans exactly what they want. It originated from Japanese mangas and animés where the creators added something with no direct relevance to the story or character development, but just for the sole purpose of pleasing the fans.

The practice has since extended to personal appearances of stars, including setting up fan meetings where the stars can mingle, take photos, sign autographs and engage in brief chit-chat.

Such arrangements have become very common among Asian pop stars. Of course these are not exactly free all the time and fans have to pay the price for such kind of… well, service.

Fan service is not limited to public interactions during fan events, however, but also extends to interaction and rapport one builds with the audience during live concerts.

Ailamarie has previously watched Japanese, Taiwanese and Korean stars in concerts and various appearances and she said Asian stars appear to be more accessible compared to their Western counterparts.

Even stars like Taiwanese superstar Jay Chou—who is known for his love-hate relationship with the press—is friendlier, nevermind the watchful assistants that surround him, ready to tackle any overzealous fan.

Ailamarie further noted Japanese pop stars are the best in giving out fan service—considering the money spent for concert tickets, airfare and goods—compared to Taiwanese and Korean stars.

She explained that tickets to watch Taiwanese stars—like F4—are very expensive but the show itself is not worth it because they only sing a few songs. The same goes for Korean pop stars, she added.

“There is more interaction with the audience, especially with Japanese idols,” she said, basing her standard on a “JE concert”. JE refers to Johnny’s Entertainment, Japan’s biggest talent agency for male pop idols; it is behind such acts like SMAP, Arashi and Tokio.

“JE concerts, like Arashi, can last up to three hours,” she elaborated. “South Korea’s Super Junior gives a lot of fan service too, the members will really mingle with the audience.”

On the other hand, she noted, Bieber appeared too absorbed on his performance that he had little interaction with his audience, composed mostly of screaming teenagers and even pre-teens, who despite their age are known to hold up banners saying “Marry me Justin”.

“It was just like watching an ordinary show,” Ailamarie continued. “But if you watch Japanese and Korean concerts, it really is pure entertainment,” she added, citing the effects and budget that go into these shows.

Also, the ticket price for a Bieber concert equals that of top Asian acts, but the concert experience is miles apart.

Sometimes it can be the other way around, however, when a highly entertaining show meets a lukewarm audience. At her Singapore concert two weeks ago, Taiwanese singer Jolin Tsai had to cajole the somewhat sedate crowd all throughout the show that was marked with several costume changes and awesome effects like a water show.

“Can you all please liven up and go wild for me? The most important thing to me is your reaction. When all this dancing tires me out, what keeps me going is your energy. Please clap and scream for me!” the pop diva was quoted as saying. Tsai perhaps wondered what other fan service she could do to warm up the audience.

Yet, for Bieber, all he has to do is stand there and his multitude of fans go on a screaming frenzy. One cannot argue with teenage hormones and stronger lungs. And if his Twitter account is any indication, the young pop sensation has almost 10 million fans all over the world. Who needs fan service anyway?

Perhaps Asian stars need to work harder because the competition is stiff. There are simply too many singers and actors competing for space in the already crowded entertainment stage.

Or maybe, the difference in attitude between Asian and Western stars all boils down to culture.

Western stars look at their work—whether in a concert or movie—as the embodiment of their service to fans. On the other hand, Asian stars realise that they need to be more personal to connect better with fans.

Bieber does give fan service once in a while. In Kuala Lumpur, 12-year-old Low Bi-anne said she was not going to wash her hand again after her idol touched it. “I touched Justin Bieber!” Low screamed after she shook Bieber’s hand in an exclusive meet-and-greet before his Kuala Lumpur concert.

As a netizen named PJammer said in a forum: “Fans like personal service. They like to feel that they are in touch with you and your life.”

*Name has been changed upon request